Pottoka is a breed from the Basque Country. It is a slender and strong animal. Very well adapted to the environment of Euskal Herria and at the same time reinforced and molded as a result of this special environment. Inhabiting our mountains and valleys since the Paleolithic Era (40,000 B.C.). The beautiful images of the Ekain and Santimamiñe caves bear witness to this. Until now it has been a loyal and hard-working helper in day-to-day life and development. The pottoka has long played an important role in the tradition and myths of Euskal Herria. All this and the breed’s own personality and antiquity make the pottoka special.

Some drawings and images of Euskal Herria (Ekain, Etxeberri, Santimamiñe…) have as main subject the horse’s head, favorite prey of the hunters of the Madgalenian age, and the pottoka also appears in several drawings made on bones. These data make us think that the pottoka has lived in the mountains of Euskal Herria since the Paleolithic Age. Therefore, they may be the testimony of the horses of prehistoric times, a breed that has lasted until today and has special zootechnical characteristics.

The Pottoka has had various uses throughout history. It is a well-built animal, with medium and proportionate measurements and a strong muscular body. In character, on the other hand, they are fast, faithful and very resistant. For all these characteristics it has been used for various functions: riding, hunting and wars, cart pulling and agricultural work, pulling mining wagons, grain sowing, for meat (crossed with burguete horses), foreign exports (Indian army) and lately, apart from being used to keep the meadows and mountains clean, it can be seen in various riding activities.

Despite being an extraordinary animal for the above mentioned activities, today it is an endangered animal. Nowadays it has been marginalized to the mountains and useless corners for several reasons: modernity, mechanization of agricultural works, private ownership of mountains and lands and their productive utility, the breed itself and the lack of market for its products.

It is a social horse used to living in a group. The group normally consists of 10-15 females and their respective males. The relationships between the two are very special and in early spring and summer are reinforced. Each group usually lives in its own territory. Traditions are renewed from generation to generation, the topography, the microclimate and the knowledge about the plants are transmitted from one to another. 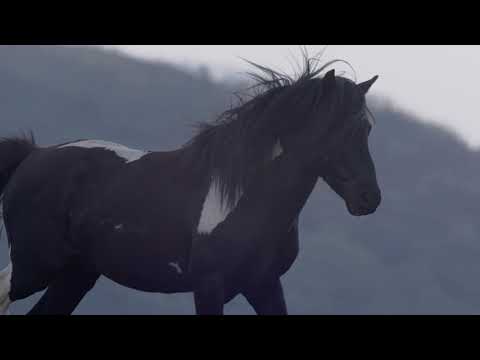