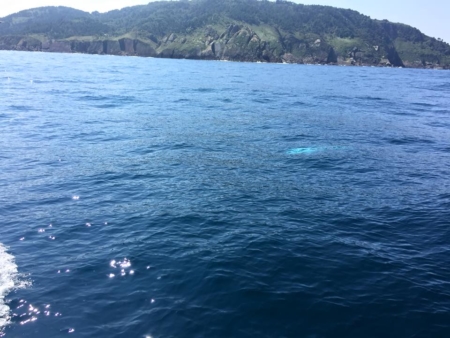 This season we had unforgettable moments with our customers. One of them and perhaps the most exciting was when sailing only half a mile from San Sebastan we spotted white dorsal fins. I wasn’t sure what I had seen so I discussed it with my colleague Enrique. He confirmed it to me. He had also seen those imposing white fins. They were moments of confusion because they took a few minutes to emerge again.
When we saw them again they were closer to the boat and we could see that they were totally white, white as snow. I quickly thought of the Beluga whale as the shape of the head and the colour white coincided but not the dorsal fin. The beluga whale does not have a prominent dorsal fin and only inhabits the Arctic Circle.
The customers on the boat were very excited and asked if it was normal to see white whales. Obviously this is not normal. For me it was the first time I had a chance to see one.
After thinking about what kind of whale it could be, we came to the conclusion that it was the pilot gray whale. When they are adults that gray color becomes white. The description coincides perfectly with this species.

They were a while emerging from the water but always maintaining a distance with our boat. It was impossible to capture a good image with our mobile phones but we all have that moment engraved in our memory. I hope to find more in the future and that our customers can enjoy them. 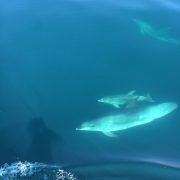 Pearls of the French Basque Coast